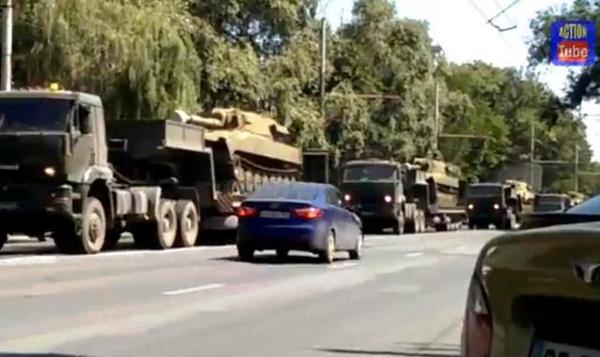 Apparently painting trucks white changes everything!!!  Well thats what comrade Putin would have you think.  How do we know that?  For a week Putin has been telling the world that Red Cross has accepted this mission (they have not), They have said that Ukraine has agreed to this mission (they also have not unless handled by Red Cross).  They [Russians] for days now have been looking for the softest spot to invade the country.  Well they were not able to find one such place since Ukraine’s forces recently overtook the only town that would allow them rebel controlled access.  So they just sent in their troops instead.This is what it actually looks like when Russia says “aid”.                 When russia says it wants to “help Ukraine” its like a pedophile asking to babysit your children.   Putin has just become so brazen lately.  He really believes that people are buying any of this.  His insult to the worlds intelligence is flagrant, it makes you wonder how far does this go. I wouldn’t worry though, at this rate it will take Putin another 20 years before he invades Paris claiming to be helping russian speaking people.  Moldova you look Juicy you are next on Mr Putin’s wish-list.